To hug or not to hug 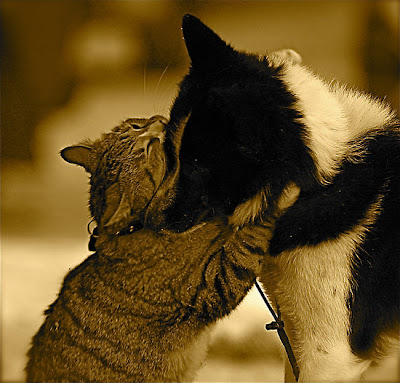 As I say, I had a great time interviewing Jeff Bridges in LA the other day. He's a very tactile, touch-feely kind of guy, always giving massages and bearhugs, which led to the only awkward moment in the interview. Awkward for me anyway. He was talking about combatting fear on the movie set and he reached out to touch my knee to emphasise a point. My leg shot out from under me, whether from nerves, reflexes or a mixture of the two I'm not sure. He did it again, and the my leg jerked again. It was embarrassing. I brought it up earlier with my friend Darrell.

ME: "The only downside was he touched my knee and my leg jerked. Twice."
DARRELL: "I'm the same way. I always feel awkward around the people who touch."
M: "I don't mind that he is. I like touchers. I just don't like that I respond so badly. I feel like I betrayed myself. I've been outed."
D: "— as a non-toucher. I'm sure he didn't mind. Do people hug much in England?"
M: "We've just started. Some people do, some people don't. You never know which one you're going to get."
D: "The worst is when you screw it up with someone you know. It's not easier with someone you know, its harder. Because if you screw it up — what does that say about the friendship?"
M: "You can't even greet each other. That's terrible."
D: "It is what it is."
M: "I guess."