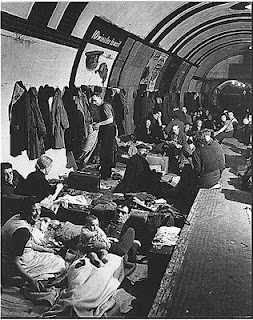 Over at the Daily Beast, Tunku Varadarajan takes exactly the wrong message from the recent attempted terrorist attack. He notes

"the swiftness with which our popular culture has made light of the episode. “Fruit of the Loon,” blared the front page of the New York Daily News, in a play on the name of an underwear brand... People are asking when the last time it was that a Dutchman tackled a Nigerian outside a soccer field, and making quips about an Islamist “boxer rebellion,” a terrorist “brotherhood of the traveling pants,” a “jock-strap jihad,” and a “new Y-front in the war on terror.”

Excellent news, surely: evidence not just of the nation's sense of humor but of precisely the spirit that got Britain through the Blitz and which saw off the threat of terrorism — by refusing to be terrified. All wrong, says Varadarajan. Such larkiness offers "telling commentary on our state of mind—a commentary, in truth, on the extent to which we have become inured to threats of terrorism." Fair enough, I guess, if a little grumpy. We mustn't rest on our laurels. We are a nation at war after all. Maybe we should be asked to sacrifice more than just a few minutes waiting time at the airport. But no. The security measures, too, are at fault:—

Instead of denying my 10-year-old boy the right to take a pee when his destination is a whole hour away, why can’t we be radically more careful about those we let on board our planes? Abdulmutallab’s name was not on the terrorist “no-fly” list, which has fewer than 4,000 names in total. It was, however, on a larger database of some 550,000 individuals, called TIDE (Terrorist Identities Datamart Environment)—and it was inserted there, it seems, only last month. Why is anyone on this list allowed to board a plane to the United States? Why not convert TIDE into a “no-fly” list?"

What he is advocating is a system wherein Abdulmutallab’s father could have barred his own son from ever flying, purely on his say-so: effective for the 1% of genuine terrorists it catches, not so much for the 99% of people using it to settle family arguments or conduct grudge matches with their neighbours.

Let anyone on that list who believes his name is there erroneously, or undeservedly, appeal—through legal channels—for removal. If he has a case, it will surely be heard, and yield a just, airborne outcome.

Ah. How well that would work. Now he's the one joking, surely.