What does Avatar do to the Oscar race? 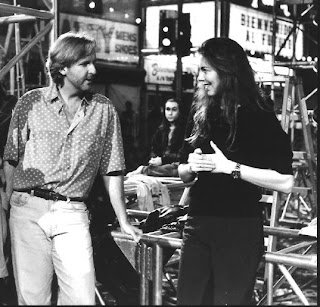 Everything was fine until Avatar came along. Now, the chess board has been upended and all the pieces need rearranging. I agree with the Vulture that it can't get best film — at the end of the day it's a movie about blue people, and nobody gets two sweeps of the board, not even Spielberg. But remember what the Academy did in 1998 with Saving Private Ryan: they gave him director but not film. The only problem with giving Cameron best director is that it deprives Kathryn Bigelow of a hugely deserved and satisfyingly-historic win as the first woman director, but what if Hurt Locker got best picture? It wouldn't feel so bad then. Avatar has certainly doomed Precious's chance of winning by reminding the academy of what epic filmmaking can look and feel like. Their pallette for indie-small-worthy has been ruined. Can it do the same and knock Up In the Air off the board, leaving the way to Best Picture clear for The Hurt Locker? To put it another way: by proving themselves the other's only worthy opponents, do Cameron and Bigelow end up helping one another?