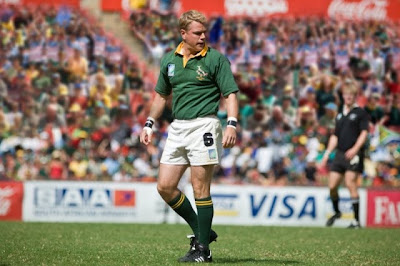 Last night, my wife and I went to see Invictus, Clint Eastwood's movie about Nelson Mandela (Morgan Freeman) leading his country's rugby squad, captained by Matt Damon, to an inspirational apartheid-salving world cup win. It was a little obvious, old-fashioned, undeveloped, poorly shot and very powerful. (Mandela plus a sports-underdog movie? Isn't that like an Icecream sundae with bacon sprinkles?) Kate felt much the same way; walking back home afterwards we were full of beefs.

"What kind of film stock was he using? It looked like it was left over from Dirty Harry III."
"And the script. I loved that line about how important it was to beat Australia? 'So what you're saying is its very important to beat Australia.' 'Yes, that is right. We must beat Australia.' Gee thanks Clint."
"Ohmigod and the hologram of the ghost in the cell! Just in case the audience is confused by the voice of Mandela reading the poem! 'Its okay, folks, don't be scared. He's not actually in the cell any more!.="
"Did you cry?"
"All the way through, pretty much."
"Yeah, me too."
"Even when he gave that extra ticket to the black maid."
"Yep."
"Me, too."