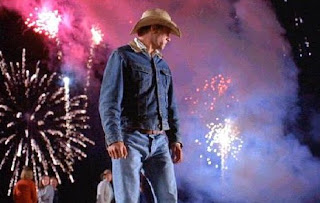 From a long-list that includes:— The Wrestler, United 93, The Incredibles, Up, Catch Me if You Can, Memento, Downfall, An Education, Traffic, The Hurt Locker, In The Mood For Love, The Diving Bell and the Butterfly, Michael Clayton, The Squid and the Whale, The Deep End, WALL-E, Milk, Anvil! The Story of Anvil! Casino Royale, High Fidelity, Traffic, Ratatouille, Million Dollar Baby, No Country For Old Men, The Queen, The Bourne Ultimatum, Sideways, Elf, Mystic River, Lost in Translation, Once, Narc, The Hurt Locker, Zodiac, Borat, Crouching Tiger Hidden Dragon

Brokeback Mountain because it was both heartbreaking and tough — you felt massive, impacted emotions moving beneath its surface. Ang Lee was the decade's most interesting director — inventive, curious, playful, scrupulous. Birth was a magical and mysterious picture, operatic and strange. I chose Eternal Sunshine over, say, Memento, or Traffic, because its smart intricate structure connected with something more heartfelt. The Royal Tenenbaums gives off this amber glow that just seems to grow stronger as time goes by, like all family albums should. Avatar has just blown me away, so maybe I'm too close, but the middle hour is a rolling, diving, tumbling, dolphin-backed delight. Knocked Up for all the obvious reasons — its painful, honest, and sharply observed without losing any warmth. I've gone back and forth on the Pixar movies, but today I'm going for Finding Nemo: it completes me. Mulholland Drive is close to David Lynch's best.