REVIEW: Avatar, the movie of the year 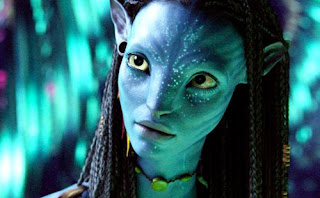 First things first: Sigourney Weaver doesn't know how to hold a cigarette and her early scenes opposite Giovanni Ribisi are absolutely dreadful. Cameron's films are such pressurised environments — everyone snarling big butch comebacks at one another from the get go — that it takes a while to adjust without smiling to yourself: ah, I remember. And I could have done without the whole dead twin brother thing. I didn't need that much explanation as to why Sam Worthington, a disabled marine, should volunteer himself for a scientific experiment involving alien avatars. He's a paraplegic. That's reason enough. This movie had me the moment Jake goes for a run in his new body, bunching up the soil between his toes. Avatar isn't just a fantasy movie: it's a fantasy movie about fantasy, about the desire to jump the confines of your existing life and into the tracks of another, altogether more fabulous existence in which you get to run and jump and fly dragons through the air. "Out there is the true world," says Jake, "In here is the dream". This can get a little trippy: the Na'vi, too, get off by plugging their thoughts into the neural cords of six-legged horses, which made me wonder if anyone in this movie was simply content to just hang out and be themselves. When Jake Sully plugged into Na'vi and then, via the Na'vi, plugged into the horse, I thought the whole circuit might blow in a jolt of pure Escherlike feedback.

Never mind the logic: this movie is gorgeous — simply and utterly, sink-your-knuckles-into-cookie-dough gorgeous. My plan going in was simple: get through the Pocohontas stuff and hunker down for the combat scenes. In the end, my expectations were totally upended. The middle section of the movie, in which Sully flies and swoops and swings with the Na'vi, was not just visually entrancing but moving, the effects as magical as a granted wish, a visual expression of Jake's cloistered dreams of mobility. And what mobility. After years of watching CGI by technicians who seem like they've never seen a body in motion, the movement in Avatar is easily the most impressive thing about it: the way the bodies have weight and mass, fixed centres of gravity, even as they they pivot and pirouette through the forest. Cameron plays by the rules, in other words, like the good physics major he is, and the resulting images feel both entrancing and grounded. This movie is built from the bottom up. I was wowed by how much cohesion Pandora had as a planet. The forest felt wet, dark and mossy; the snarling beasties had insistent, snapping muzzles that had you leaning back in your seat; and the bio-luminous stuff, which looked like too ersatz a touch — like drippy Monets in most of the stills I saw — only underlined how much Cameron was basically rendering an underwater world, above ground. You feel immersed. As for the heroine — I can't remember her name I'm afraid — she was both nubile and fierce, a combination many actresses, from Raquel Welch to Halle Berry, have tried to pull off and failed. Overall, in fact, I would say the motion-capture acting was way better than the regular sort. All those dreary nativist cliches from Dances with Wolves and Pocohontas — and believe me, Cameron uses every one — seemed to gain a little top spin from being applied to a race of blue aliens. I'm not going to lie to you: there are whole sections of this script you have to block your ears to. After Titanic, I'm pretty trained in how to best ingest a James Cameron movie: eyes peeled for the best, ears prepared for the worst. As much as I revere his instinct for the audience's pulse, I completely failed to imagine anyone who wouldn't find the whole "I see you" exchange as anything other than deeply ridiculous, not even the 14-year-old boys at whom the whole thing is supposedly aimed —especially 14-year-old boys.

The final battle was, of course, glorious. Cameron is a master of this sort of asymmetrical fight, and instinctively knows how smaller forces beat bigger ones, so it was a little disappointing that tide of battle turns on the incursion of a deity, if you please, but he soon gets it down to more maneagable proportions: a retread of Aliens, basically, with alien beastie and power-loader squaring off against one another, only this time with the audience rooting against their species. The video-game of the movie, interestingly, reverses our loyalties back again, so the marines beat the crap out of the aliens, which makes you wonder if Cameron has really succeeded in making his point stick. But the movie is a genuine wonder — beautiful, entrancing and teeming with life. I never bored of seeing the heroine draw back an arrow in her bow, or hearing those dragon jaws snap, or catching a vertiginous view of misty tree tops, many miles below.

My Cameron top five would now look something like this:—