Most Memorable Movie Moments of the Decade 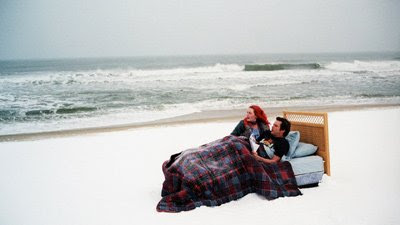 Because best movies of the decade are almost impossible. I've disagreed with almost every list I've tried to produce. I know that Brokeback Mountain and Knocked Up and Eternal Sunshine of the Spotless Mind and Birth are all in there somewhere but in what order and as for the rest... a consideration of movie moments, on the other hand, frees everything up: a bad movie can redeem itself with a great scene, a performance pull out of a slump with a single glance or line reading. And while good movies can sometimes drag, great ones never do. Howard Hawks believed a movie needed three or four good scenes to work. If it's good enough for Mr Hawks, it's good enough for me.

The scene between Heath Ledger and Michelle Williams, facing different ways over the kitchen sink, in Brokeback Mountain (2005). Finding out about Paul Rudd's Fantasy baseball team in Knocked Up (2006) and Leslie's Mann's line about him not being any less cruel just because he doesn't shout. The long close up for Nicole Kidman's face at the opera in Birth (2004) as she realises the boy really is her husband. Mickey Rourke teary-eyed plea to Evan Rachel Wood in The Wrestler (2008) and the fact that he can't think of anything to ask for except that she not hate him. The space-waltz-with-fire-extinguishers in WALL-E (2008). Gene Hackman on the go-cart with Ben Stiller's sons in The Royal Tenenbaums (2001) and the edit that gets them there. The car-to-truck bazooka exchange, shorn of all incidental music, in The Dark Knight (2008). Staney Tuccy in The Devil Wears Prada (2007). That's it. No particular thing. Just Stanley Tucci in The Devil Wears Prada. Jim Carrey and Kate Winslett waking up on a snowy beach in Eternal Sunshine of the Spotless Mind. The last few seconds of United 93 (2006). Leonardo Di Caprio pretending to be an FBI agent to Tom Hanks in Catch Me If You Can (2002) before escaping again. The penis-drawing sequence in Superbad (2008). Flexigirl flipping over the rooftops in The Incredibles (2004). Mark Ruffalo and Rory Culkin shooting pool in You Can Count on Me (2002). The sound of Bruni Ganz's tirades, heard from the next door, in Downfall (2005.) The way we find out how Tom Hanks tried to commit suicide in Castaway (2000) and the shot of the massive ship forging past his raft. Viggo's Mortenson's line to his son — "you were always in my heart" — in The Road (2009). The second murder, by the lake, in Zodiac (2008) and the halting phone-book delivery of the killer — why do horror movies always insist otherwise? Naomi Watt's audition scene in Mulholland Drive (2002). The naked fight in the baths in Eastern Promises (2008). The car-trunk defusal scene in The Hurt Locker (2009). The football match, to Abba, at the end of Together (2000). Laura Linney comforting Sean Penn after he commits murder in the final scene of Mystic River (2004). The waking-up-into-a-chase scene in Memento (2000). The speed with which Orlando Bloom fires off a quiver of arrows in Lord of the Rings: The Two Towers (2002). Sean Penn and James Franco's smooch on the street, in long-shot, in Milk (2008). The talking-on-coke scene in Traffic (2006). The cross-country chase, by headlights, in No Country For Old Men (2007) and the way that dog jumps into the river. Vera Farmiga and George Clooney comparing the contents of their wallets in Up In The Air (2009).
Any others?