Anvil: the gift that keeps on giving 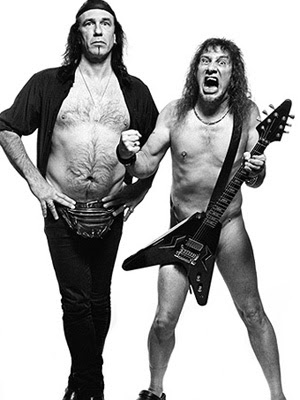 "Members of the Academy of Motion Picture Arts & Sciences saw their first glimpse of Oscar's new math earlier this month when they opened their mailboxes and found the year's first official Academy screener. The movie: the headbanging, underdog documentary Anvil! The Story of Anvil. The category: best picture. "Hey, we know it's a million-to-one shot," says Anvil! director Sacha Gervasi. "But the whole thing has been a long shot from the beginning. You never know."— Variety

Readers of this blog know that when I first saw Anvil! at the beginning of the year, I tentatively announced it as the yea's most inspirational picture. Well, 12 months have almost gone by, empires have fallen, sea levels have risen, presidents have been humbled, wars escalated, and I can happily confirm: Anvil! really is the year's most inspirational picture, whose omission from the long list for best documentary counts as the this year's knee-to-the-balls from those delightful folks at the Academy. That director Sacha Gervasi has picked himself up off the floor and started campaigning for a best film nomination is the wittiest response imaginable: perfectly in keeping with the barmy indefatigability of the band themselves.