The second coming of Kevin Costner 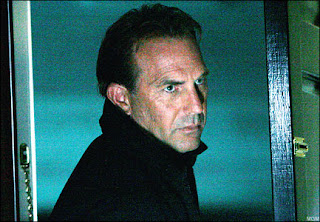 "Kevin Costner is in negotiations to join a cast that is headed by Jamie Foxx, Christoph Waltz, Samuel L. Jackson and Leonardo DiCaprio. Costner is in talks to play Ace Woody, and it's a real surprise turn for an actor most associated with good guy roles. He's the sadistic trainer of the male fighting slaves who entertain the white patrons of Candyland as well as the female slaves who are forced to be prostitutes." — Deadline Hollywood

Nonsense. Costner was superb as the recovering serial killer in Mr Brooks, played an excellent drunk in The Upside of Anger and tipped the good guy thing on its head as early as 1987's No Way Out, where he played a communist spy, if memory serves. This blog is delighted by the news of his return. Costner's filmography — Silverado, The Untouchables, No Way Out, Bull Durham, The Bodyguard, Tin Cup, The Upside of Anger, Mr Brooks — seems hewn from blondest birch-wood and sanded to a soft-rugged finish, his performances managing a fine, Cooperesque balance of leniency and resolve. He may also — if I might venture a judgement in an area not traditionally hazarded by male film critics — be one of the hottest males to have graced the screen in the last 30 years. My favorite performances of his:—