The definition of film-making genius 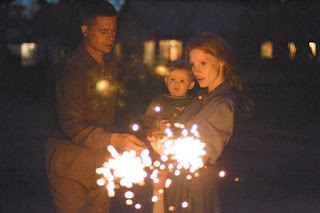 "In the same way that William James applies the tensile force of his logical prose toward the evocation of an imperceptible bridge beyond logic that must, somehow, be there, Malick has continued to muster the resources of film toward embodying what cannot actually be embodied. He wants to make film do what it is least able to do. Not content with showing how the world looks, he wants to show how it is experienced from the inside, even if that inside story can only be suggested through the cunning deployment of "this very thing”: this door closing, this muttered banality, this drowned body floating in a swimming pool, this wounded dinosaur, this erupting volcano, this suburban backyard, this face averted to avoid looking at another face." — Geoffrey O'Brien, NYRB

This is as good a definition as I have found of the difference between the kind of director who gets called a "genius" and the kind who don't. He wants to make film do what it is least able to do. In almost any other field this might be considered a form of perversity — a profound mismatch between one's aims and the medium chosen to pursue those aims — and yet it is a sign of Malick's genius, just as it was of Welles, and Kubrick, and every other director who has attracted the "master" label, except Alfred Hitchcock. Hitchcock hails from the opposite end of the spectrum, like Spielberg: the director who has cinema in his veins, whose artistic aims are entirely flush with the medium in which he happens to work, who loses interest in something the moment he realises it cannot be represented cinematically, and who have made that discrimination so many times in the course of his life that it is well-grooved second-instinct by now, complete in the blink of an eye: not interested. They are true creatures of cinema. Men like Malick and Kubrick, I would venture, make cinema their creature. They take possession of the medium and bend it to their will, which may fit some people's definition of what "masters" do — they master something. If on the other hand, a bunch of aliens landed and asked to be shown what it is this thing called cinema does exactly — what it is best at, the stuff it does in the privacy of its own home, so to speak — then Hitchcock and Spielberg are your guys.