Some thoughts on l'affaire de wapping 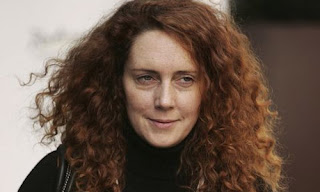 "Despite the wealth, power, and magnitude of his media empire, Murdoch has no Lear depths and mind-tattered poetry; he's a colorless king, mean and un-self-reflecting, his own chasms hidden from him." — James Wolcott, Vanity Fair

I don't have as many opinions about the whole affaire d'Wapping as I feel I should — at least if the amount of opinion being manifest here in the UK is anything to go by — but I do have a couple of thoughts. One, Rebecca Brooks hair is an utterly and intriguing piece of counter-casting. It is the kind of fiery mane on expects on the head of the woman who, in between saving the whale and protesting MI6's collusion in American torture practices, campaigns tirelessly to bring Murdoch down. Not his henchman — but his staunchest nemesis. Maybe a redhead could have played the Lady MacBeth role, but a curly-haired red-head, forget it. That signifies one thing and one thing only: that in any future movie depicting events, you will be be played by Susan Sarandon.
Secondly, a lot of people — the celebrities mostly, if understandably — are mistaking this moment as an anti-tabloid moment, when in fact what makes it significant is not that Gaurdian readers disapprove of tabloid tactics, but that tabloid readers do. The News of the World has fallen victim to the very form of virulent mob indignation to which the British public rouses itself every now and again, mostly when prodded by papers like The News Of The World. If they weren't on the receiving end of it, in fact, this would be exactly the kind of story — murder victim, pretty, her parents preyed upon by ruthless predator — that they would wring for every drop of moral outrage.
I went to visit the Sunday Times — my former employers — the other week and found the place ringed by TV cameras. "Like fiddling while Rome burns," is how one journalist described the atmosphere inside. From where I was sitting, the whole affair has the galvanism of a death rattle. But not Murdoch's. The long-term effect of Brooks's (alleged) criminality is most likely going to be that News International is going to be sold off; and that once divested of Murdoch's deep pockets, the papers will stand revealed as the much scrawnier creatures they, in fact, are. They will then be subject to the same drastic austerity measures that have befallen the Telegraph and Independent. The era of the cash-injected, steroid-enhanced British Sunday paper will be over.