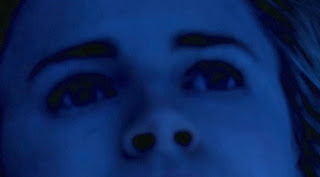 "Marling plays Rhoda, a brilliant young woman, recently accepted to MIT’s astrophysics program, who kills someone’s family in a drunk-driving accident. Crippled by guilt, she dreams of escape to the second planet earth that has been discovered, on which has been discovered exact replicas of every single person here on earth. An unabashedly cerebral film which takes on some chewy subjects — guilt, atonement, absolution — it nevertheless casts an undeniable spell, not least in the consonance it establishes between that second earth hanging there in the sky like a vast pale moon, and the yearning in Marling’s beautiful, upturned face." — from my interview with Brit Marling for The Independent

I admired but didn't much enjoy Another Earth, a short film given feature-length treatment in which Marling's character enjoys a weird, masochistic relationship with the father of the kid she killed. She turns up on his doorstep, offers her services as a house cleaner, keeping her identity secret, and then proceeds to clean the dishes for a few months, in lieu of her conscience, in the manner of a Paul Auster character, exchanging no more than snatches of dialogue with her guilt-object, before disrobing somewhere in the 70th minute to have sex with him. Basically, she takes the only course of action gauranteed to make her feel worse by the movie's end than she felt at the beginning. It's a curious study in moral wretchedness — one bad act breeding another. Why is guilt always given such top-drawer treatment by high brow art? Is it the opportunity it presents for high-toned suffering? Spongy self-analysis? The wracking and clutching of brows? A chance to summon the shadow of Dostoevsky? In real life it doesn't seem much of anything except self-absorbed — it's neuroses posing as morality — and like most solipsistic emotions, it's tedious to watch in others, or on the screen, unless the person suffering it is innocent, a la Hitchcock, or a murderer who has escaped punishment. But I can't think of many examples where watching an actual guilty person act guilty about a guilt-inducing act has packed much dramatic surprise. Marling is beautiful, though — a cross between Manhattan-era Meryl Streep, as has been pointed out, and a blonde, Wikileak-era Jennifer Connelly. C+