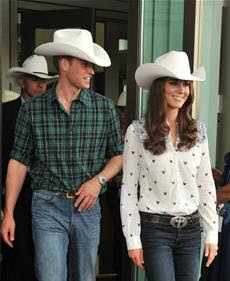 The Royal couple's decision to visit LA — their first such visit — is a good one, I think. For one thing they looked natty in those stetsons, but it also reaffirmed the one thing they have going for them: their status as celebrity. It's often said that American celebrity is royalty without the constitutional power, without mentioning that that definition has pretty much covered the actual royal family for several decades now. So for the Prince and his bride to visit LA felt like a fascinatingly equal cachet-match. I wish, however, that CNN would stop referring to the people lining the streets as "well-wishers." I don't honestly think a single person is standing there going "ooh, I do wish them well in their endeavours...." They're gawking, the same way they would gawk at John Travolta. Nobody would say of a Travolta mob, "there's John Travolta with his well-wishers." It's the lace doily of fan nomenclature — the cocked little finger.