Gone With The Wind at 75: yep, still there 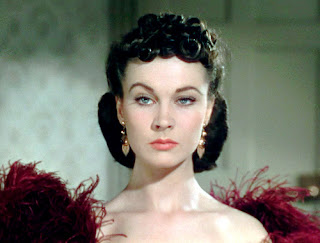 "To the post-war generation, things were much simpler. If someone asked them what a blockbuster was they simply pointed to Gone with The Wind — the very definition of a blockbuster, if only because for several decades it was the only one they had. Occupying an unparalleled hold on the number one spot from 1939 to 1972 — almost forty years — Gone With the Wind was the Hoover of blockbuster movies, both brand leader and one-movie monopoly, sucking up the competition on all sides. “The business of Gone with the Wind was not just steady, it was an economy unto itself”, writes David Thomson in his biography of producer David Selznick. Selznick had ambitions for Gone With The Wind from the word go: he used the casting call to find his Scarlett O’ Hara as a nationwide publicity gimmick; and once he had secured his participants, everyone in the production — Selznick, director Victor Fleming, Vivienne Leigh, Clark Gable — took up their positions for what amounted to a four-way group snarling session that lasted almost a year. “It was a case of utter chaos. They burned themselves, and out of the ashes rose this Phoenix of a picture” said Marcella Rabwin, Selznick’s assistant at RKO. “I have never know so much hatred. The whole atmosphere was so acrid. Leigh hated Fleming, with a passion. Fleming hated her. He called her the vilest names. Clark Gable hated David.” As the picture neared completion, Selznick knew what he had on his hands and wrote to Metro’s head of marketing, invoking D W Griffith’s Birth of a Nation, and saying, “the picture is turning out so brilliantly that its handling will have to be on scale and of a type never before tried in the picture business.”

By far the most interesting thing about Gone With The Wind, though, at least to today’s eyes, is what happened after its release, which is to say: precisely nothing. Nobody started manufacturing Rhett Butler dolls. Nobody tried to copy it, or make it happen again; it didn’t spawn a sequel, let alone an entire industry. Selznick tried to follow it up with Duel In The Sun, a film for which he pioneered an interesting new trick of opening the film wide — as wide as he could, in 38 cinemas. “If the public’s ‘want to see’ for a forthcoming picture samples higher than the reaction of test audience’s,” noted one critic, “you sell your picture in a hurry before the curious have a chance to get wise.” But the tactic — which would turn out to be one of the mainstay’s of today’s blockbuster industry — failed, along with the picture. It was back to Gone With the Wind whose reign at the top was further boosted by reissues in 1949, 1954 and 1961. The American people had spoken: they had their blockbuster, and occasionally they would take it out of its display case to have another look at it, but then they would pop it back again, with a satisfied sigh. The first serious competition it faced came from Cecil B De Mille’s remake of his own film, The Ten Commandments, in 1956, which took up a close second position; while the arrival of Ben Hur in 1959 made it a three-chariot race, and from 1960 to 1965 those three films took up a neat triangular stranglehold at the top of the box-office charts, until Julie Andrews vaulted up the mountainside and joined them in 1966 with The Sound of Music. Box-office statisticians, you can’t help but feel, had an easy life back then. Sat atop the pyramid, their feet up, occasionally glancing down to see what dim jockeying they could see down below, but basically filing the same report, every year, like the BBC’s royal reporters: yep, still there."

— excerpted from my book Blockbuster: How Hollywood Learned To Stop Worrying and Love The Summer