I'm pleased she got off 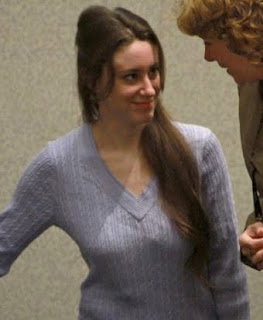 "Appearing to resent" and "peevish" are too mild, actually--many of the instant commentators on cable were visibly, audibly angry at the AUDACITY these acquittals. (Once exception: Judge Andrew Napolitano on Fox News, who was calm and sensible.)... What little I saw of the coverage was disgusting and sob-sister, this endless fetishizing of "little Caylee," as if these well-dressed, high-paid lawyers and media mouths had adopted her as their own little angel, and minutes after the verdict came down there was Judge Jeanine Pirro wailing, Where is the justice for this little girl? ("Justice for Caylee" was the sidebar subhead on Grace's Headline News coverage, as if it were a personal crusade.)" — James Wolcott

Strange to say I was genuinely moved by Anthony's tears of relief and I am not at all convinced she is innocent. That's the problem with the death penalty. It will always encourage those like myself towards acquittal because they believe the punishment so barbaric. I also love the way the media kept referring to "that beautiful little girl" as if it were a worse sin to kill a beautiful child and perfectly okay to off the ugly ones.