Cy Twombly: Hallowed be thy name 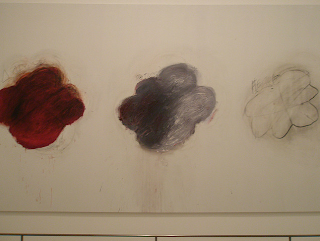 Cy Twombly has died, aged 83. Obituarists and art critics have dug deep into all areas of the great man's life and work — his Barthesian bridging of the visual arts and and written word, his Poussin-like portrayal of a modern Arcadia, the childlike jouissance gleaned from the simple act of the scribble — but unless I have missed something no commentator has paid tribute to one of the painter's more striking and immediate contributions to the jollity of 2oth- and 21st-century discourse: that fabulous name. I'm not much of an expert when it comes to modern art, distrusting the tired logic of avante-gardism, resenting the termitic prevalence of French theoreticians and frankly bored of any discipline that would have me pay such endless attention to the tedious question of self-definition, but I know what I like, and I really like the name Cy Twombly. It is the kind of name that make you want to roll down a grassy slope, or eat jam with your fingers, or produce the kind of free-associative garden-fresh canvases for which Twombly was famous. Who knows? Maybe it was the daily shock of waking up and finding himself still named Cy Twombly that produced his best work, and his inevitable familiarity with it that resulted in that inevitable mid-period levelling-off.