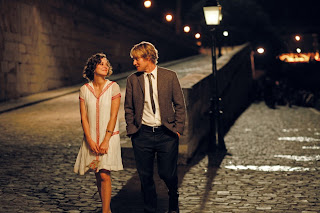 In Midnight in Paris, Owen Wilson plays a writer who gets to road-test his nostalgia for 1920s Paris against the real thing when he is magicked back in time to swan around with Hemingway, Picasso, Gertrude Stein, Dali and the like. The film is a charming confection, with the wispiness of many late works. The moment the fictional characters in The Purple Rose of Cairo hit the real world, they also hit a series of snags — no iris fade-outs after a kiss, punches which leave real bruises — which drew out the movie's theme: fantasy vs reality and why the two should never have moved in together. About round three of Owen Wilson's sojourns with Hemingway et al, you realise that Allen isn't interested in developing his idea: Wilson is not being disabused of any preconceptions about the past, or having his expectations tested or upended in anyway. Allen is interested solely in mining the wide-eyed comedy of mixing with your heroes, which turns out to be enough for 70 minutes or so, at which point, Marion Cotillard turns up as everyone's favorite muse, and the jokes is: she is nostalgic for the Belle Epoque — a wormhole within a wormhole — and begs Wilson to stay with her there, much as she begged Leonardo Di Caprio to stay locked in Inception's dreamscapes. Cotillard is fast turning into filmmaker's favorite femme fatale of the Unconscious — a Siren of the Id, luring her male costars to loiter with her in Lotusland. Midnight in Paris is Inception for nostalgics. With jokes. Rachel McAdams is miscast as a young shrew, and Adrian Brody steals the show as Dali — "I am.... Da-Li!" he pronounces with a flourish, upon the merest prompting, to people he was introduced to just minutes before — and everyone goes home with the happy sense that they have seen one of the better Woody Allens. B-