The making of Badlands 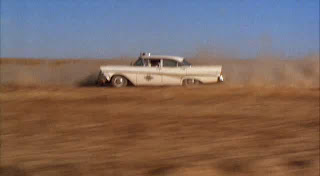 TERRENCE MALICK: At the end of my second year in Los Angeles, I began work on Badlands. My influences were books like The Hardy Boys, Swiss Family Robinson, Tom Sawyer, Huck Finn—all involving an innocent in a drama over his or her head. I wanted the picture to be set up like a fairy tale, outside time, like Treasure Island.

SISSY SPACEK: Terry would give me little rolled-up pieces of paper with lines of dialogue on them, and I would say them, and he would just howl with laughter; that just egged me on. He'd tell me little bits of things about Holly. More than anything, he was asking me questions. I felt like I was being mined. It was just wonderful.

MALICK: Kit [sees himself] as a subject of incredible interest to himself and to future generations. The movies have kept up a myth that suffering makes you deep. It's not that way in real life, though, not always. Suffering can make you shallow and just the opposite of vulnerable, dense. It's had this kind of effect on Kit.

MARTIN SHEEN: Terry told me to think of my gun as a magic wand. Kit's idea of solving problems was just to wave it: Excuse me. Problem solved. I dismiss you. All the best. Nothing personal.

JAKE BRACKMAN (screenwriter): He's always been able to connect with people in an unusual way, and a lot of it is quite debunking and satirical, but it's in a way that people really feel he's paying attention to them and kind of has their number. He'll allude to things that point to their weak spots in a humorous way, for example, but that is flattering.

TONY PALMIERI (assistant camera): He would observe you, because he had an interest in what made you tick. What made you special. He took out the best of you. Not just the actors. Anybody.

SHEEN: [Assoc. producer] Lou Stroller made some comment about Mrs. Malick, and Terry was not having it, and beat the hell out of him. In true Texas style — he was so Texas. Didn’t even hesitate, just started swinging. They were down like two buffalo — they were big guys — and they were on the ground, rolling around, and Terry just whupped him. Oh, I acted outraged — “What a breakdown of discipline, this fighting on the set!” — but I couldn’t have been prouder of him. Can you imagine? If more directors would beat up their producers, we’d have a lot more artistic freedom.

BRACKMAN: Whatever it took to function as a Hollywood personality had an enormous price for him, and he could see it as something that destroyed a lot of people, and almost made nobody get better as a person. And you've only got one life, and do you want to live it this way, where you're constantly having to schmooze the suits? He's incredibly skillful at something he presumably abhors, and maybe at a certain point he had to throw that over or drown in it.

ARTHUR PENN (director; friend): I think it was a desire to save his life. To save his sanity. When Hollywood suddenly drops down and bows at your feet, one indulges—I speak here personally—in a terrible sense of deservedness. It believes that everything you say is right. And not only that, but that everybody is in agreement with it. It's terribly intoxicating, and without value. Resistance has gone out of your life. It's so dangerous that I think Terry fled it, because he was offered the world by Charlie Blühdorn at Paramount.

SHEEN: I've worked with Mike Nichols, with Coppola, Scorsese, and Spielberg, but Badlands is the film I'm proudest of. I don't mean to denigrate any of the others. It's just the raw facts.

— from GQ's oral history of the making of Badlands