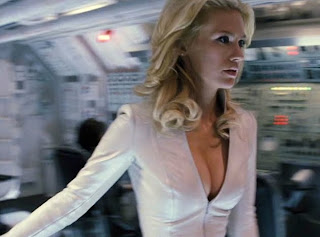 "Break out your Madeleines, the summer blockbuster is experiencing a Proustian rush. If the movement of last year’s movies was solipsistically inward, probing such deep epistemological matters as whether we are, or are not, a figment of Leonardo Di Caprio’s imagination, this year’s crop jump backward, their plots o’ercast with the amber hue of retrospect. On June 3rd, we have X-Men:_First_Class, an origins story set in 1962; Magneto and Professor X are in college, duking it out over who gets top bunk while the Cuban Missile Crisis plays out in the background. This is followed a week later by Super 8, J J Abrams touching ode to being ten in 1979, when aliens from another planet were greeted with Spielbergian wonder and not a full pat-down and cavity search. On July 22 we have Captain America: The First Avenger, in which a 90-pound weakling steps into a science lab and emerges big enough to bounce Nazis off his bicep. A week after that we have Cowboys and Aliens, which pretty much speaks for itself. If this keeps up we can presumably look forward to a new Superman movie in which the caped crusader is returned to his Depression-era roots to do battle with moonshine bootleggers, and the new Terminator movie, in which Arnold Schwarzenegger travels back to the roaring twenties to protect Zelda Fitzgerald from character assassination by future biographers of her husband.

What the deuce — or blue blazes, depending on period — is going on? The summer is not traditionally the time when Merchant Ivory trot out their picnic hampers and cucumber sandwiches. Not that you could mistake any of these films for latest Henry James adaptation, exactly — no film called Cowboys and Aliens is intent on cleaving too hard to the historical record. On the contrary, the anachronism is the point, just as the appearance of blackberries in Guy Ritchie’s Sherlock Holmes was designed to send the pince-nez flying from the noses of Conan Doyle fans. We live in the era of the movie mash-up; in the salad bar that is the head of the modern movie executive the past is ripe for tossing. In some ways, pictures like Pride and Prejudice and Zombies and Abraham Lincoln: Vampire Hunter constitute the sweetest of compliments, there being no greater attribute we can bestow on historical personages than an ability to smush the undead. Even Roland Emmerich, king of the disaster-zone, is making a picture about Shakespeare, for heaven’s sake, which tells you something about the shifting loyalties of today’s audiences: we’ve seen how the world ends, and, frankly, it’s getting a little samey.

Have you been back to the future recently? If the last installment of the Terminator franchise was anything to go by, the future has long since succumbed to terminal rust. That film, like so many others, gave us a darkened, battle-scarred plainland of mud browns and post-apocalyptic taupes, in which the haggard bark orders at the hoarse beneath skies the color of vengeance. Buck Rogers would fall into a dead faint. The present is scarcely much brighter. Ever since Chris Nolan turned The Dark Knight into a scowling disquisition on Bush-era justice, no self-respecting piece of popcorn cinema has felt complete without a salting of war-on-terror subtext, whether it be the responsibilities that beset a lone superpower (Spiderman), the threat of the illegal arms trade (Iron Man), or the virtues of diplomacy versus boots on the ground (Transformers 2). Even the last Harry Potter sank beneath to a profound, late-stage Imperial gloom. “These are dark times, there is no denying it," intoned Bill Nighy, while the forces of darkness encircled our heroes, shivering, in a tent. I always thought pop culture was supposed to be about fake uplift—a draft of Leithian forgetfulness to ease the pain of our cramped late-capitalist existences with a cheerful blast of false consciousness?"

— from my article about retro blockbusters for Slate