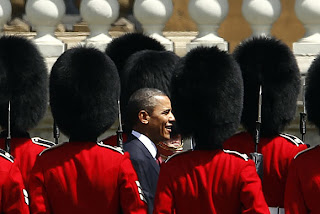 'A Buckingham Palace spokesman said Her Majesty has been intimately involved in the planning of the Obamas' State Visit; she hosts only two State Visits a year. "Very warm words have been spoken between the royal family and the Obamas," he said. "There is a genuine, genuine - and I really mean this - a genuine warmth between the two families."' — The Daily Telegraph

Of course there is. Watch the footage of them together and the Windsors are practically tanning themselves in the Obamas' toasty celebrity glow. They're heaven-sent: a chance for the Royal family to redo all they got wrong with Diana, to embrace modernity, kick back, blow away the cobwebs, indulge in a little unscheduled PDA and offset those nasty charges of racism clinging to Prince Phillip.