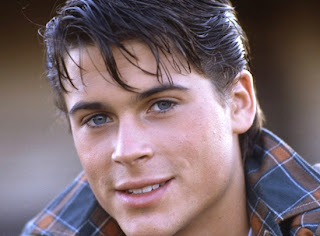 “In this Wild West gold rush even industry insiders can’t keep track of what’s what or who’s who,” writes Lowe his new memoir, Stories I Only Tell My Friends. It’s unusually well written: smart and self-aware, with a great account of the Darwinian death match that was the audition-process for The Outsiders in 1983: Lowe’s breakout role, opposite a young Tom Cruise, already on the phone to his agent (“Paula they are making us share…”), Patrick Swayze howling like a wolf in tight-t-shirt and jeans (“he makes Cruise look lobotomized”) and, best of all, Matt Dillon, sauntering through with a boombox on his shoulder, a Marlboro drooping from his lip, and a girl lodged in his armpit, beaming like she had won the lottery after being plucked from the crowd. “Matt yawns and the elevator door closes,” writes Lowe. “The entire transaction takes less than 45 seconds.”

He sounds like he was taking notes. “I was taking notes,” says Lowe. “I was like: you have to be fucking kidding me! It was like: ‘here let me show you what I do. I need some money, I’m going to go to this bank, I’m going to say hey I’d like some money, they’re going to give it to me and I’m going to walk out.’ It was as if that was the lesson. Wow. I couldn’t get a girl to look at me in the fucking lunchroom in the Santa Monica [High School]. I didn’t know how fame worked. And I had never seen anybody exercise it in that way. You give me five or six years and I’m gonna’ learn by God.'

Lowe adopts a variety of tones when addressing his sexual history, both in the book and in person, as if caught between the warring impulses of telling a good story, and staying true to the studly spirit of his 24-year-old self, while inking in the deeper understanding of his behaviour that has come with marriage and 20 years of sobriety. “Believe me, I really, really get the whole, ‘oh you poor guy, it must have been hard to have women throwing themselves at you.’ For a long time I was happy to live my life without digging into why I was the way I was but after a while, you can’t just say ‘oh yeah I’m the kind of guy who comes home on any given night and girls have broken into my house and are naked in my bed wearing my underwear. That’s just the way it is.’ When you start digging into that stuff you find that it isn’t funny or sexy or weird. It’s a lot of other things…. that are hard for people to understand and justifiably so.”

Actually, it’s not too hard to understand: take one dazzlingly beautiful 24-year-old male, arrest his development at 18, when he still thought himself the class nerd at Santa Monica High School (“I was the acting fag. That’s what they called me”), so he’s still playing catch-up in his head, stir in a lurking resentment towards his piece-of-meat treatment by some of his female fans, provide an inexhaustible supply of the world’s most beautiful women and — voila! That is not a recipe for a Trappist monk.”

— from my interview with Rob Lowe for The Daily Telegraph