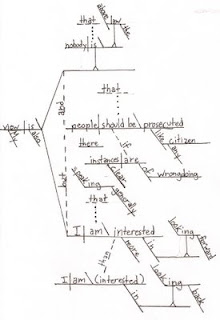 The Millionsblogs parses an Obama sentence:—

Obama has a good memory for where he's been, grammatically, and a strong sense of where he's going. His tripartite analysis of the problem is clearly reflected in the structure of the sentence, and thus in the three main branches of the diagram. (Turn it on its side and it could be a mobile.) Obama's confidence in the basic architecture of his sentences allows him to throw in some syntactically varied riffs and qualifiers: an absolute phrase here, a correlative conjunction or comparative adjective there.

By contrast with the syntax, the diction is quite straightforward, which may account for why the majority of Americans, unlike their pundit overlords, don't seem to feel that Obama is talking down to them. The verbs here are all "to be" verbs, given weight by participles like "prosecuted" and "interested," and by the muscular commonplaces, "above the law," "looking forward" and "looking back." The only superfluous adjective is "clear," which sounds positively Bush-like, even as it serves to qualify the clause it's attached to. Even more remarkable: by virtue of the third "that," this is a complex sentence, but not a compound one. Like "I'm the decider," it has a single, copulative predicate. This may be the essential Obama gift: making complexity and caution sound bold and active, even masculine.

It is possible - mistaken, I think, but certainly possible - to dismiss this sentence as a platitudinous non-answer, and if comedians ever overcome their Obama anxiety, this may be his Achilles heel: "The beef, assuming it's in a port wine reduction, sounds, uh, amazing, but on the other hand, given that the chicken is, ah, locally grown, I'd be eager to try it."