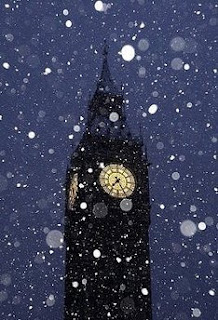 The recent pictures of London under snow have made me hopelessly and horribly homesick I'm not sure why. It never snows in London. I certainly don't have any memories of snow when I lived there. And it snows all the time in New York. Maybe I'm just more facile than I thought and responded, Pavlovian fashion, to the picture-book images. Actually, I know what it is. Its not the fact that it's common. Its the fact that its uncommon and I'm missing out. I remember what it was like when Thatcher resigned and when Diana died and I imagine the snowfall to have a similar effect — a sort of big civic hug. Maybe people are bonding. Maybe they are performing small and unexpected acts of kindness. Maybe they are feeling young and foolish and giggling when they look out the window. Or then again, maybe they are shovelling grey slush out of their driveways so they don't slip and fracture a toe. Either way, I'm jealous; they're doing it all together.