If you ran the Academy 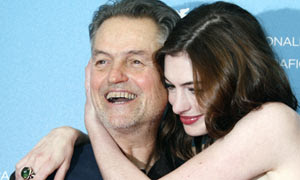 The Carpetbagger asks: what would you do if you handed out the Oscars? In his case:

Anne Hathaway would be more than an also-ran in lead actress. “Rachel Getting Married” might have snuck in to the best picture picture. Kate Winslet would have been nominated for “Revolutionary Road” instead of “The Reader.” And “Gomorrah” would not only be up for best foreign-language film, it would threaten in the best picture category.

Agreed. Plus: WALL-E would get a best picture nod, as would the Wrestler. Russell Brand would get a best supporting actor nomination for Forgetting Sarah Marshall. Marisa Tomei would be the hands-down, no-questions take-all-contenders BSA winner. Bruce Springsteen would be nominated and win. Slumdog Millionaire would be nominated and not win anything besides best editing. But here's the thing: I'm not sure I'd want to live in a universe in which the right films won the Oscars. 1) We would have nothing left to complain about; 2) Indie filmmakers would have no clue what it is they're supposed to be independent from; 3) The suits would all start smoking roll ups and block-booking Fassbinder retrospectives. 4) The word "meretricious" would lose 90% of its meaning, and probably collapse, causing untold knock-on effects in other areas of the dictionary. What makes disliking a movie like Slumdog Millionaire or The Reader such a life-sustaining experience is the sure knowledge that other people think it a work of genius. Disliking a bad movie is not enough: a bad movie must be overrated by others to instill the pain necessary for all meaningful action. What the Carpetbagger is proposing is pure through-a-wormhole-backwards chaos. It is to be resisted.