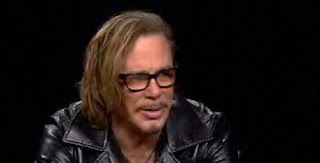 My favorite interview with any movie star in years: Mickey Rourke on Charlie Rose. Up there with Tom Hanks on In The Actor's Studio. There are so many good things going on inside Rourke's head, these days, that any interviewer who gets to him is in for a treat. The only thing Charlie didn't ask him is whether an Oscar win would really be the best thing for him. Might he not turn back into an a-hole again? It's got to be weighing on some voters minds.
I go back and forth on Penn and Rourke almost daily but am currently thinking this: in a close two horse race, the underdog is to be favored. Supporting actress is still proving hard to call, not helped by the fact that I still haven't seen Doubt: it's feels like it's either Viola Davis or Penelope Cruz. I'm a bit bored of Cruz: she seems to have been front-runner for too long. And Davis makes sure that Doubt gets itself recognised. The other question I haven't answered is how they reward Benjamin Button: to go from a near record-breaking haul of 13 nominations to a couple of technical wins seems like too big a step-down.  I'm expecting it to sneak one surprise win, maybe for costume or best score? Desplat is certainly due.