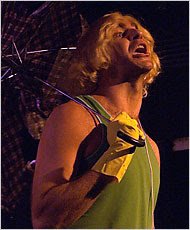 My friend Mark Sam is being sued by The University of the South, which owns the rights for Tennesse Williams’s Streetcar Named Desire, to "cease and desist" with his new one-man show, in which he ventriloquises a modern-day Blanche Dubois weathering Hurricane Katrina at the the New Orleans Superdome. The Williams estate are disputing that this falls under the "fair use" part of Mark Sam's first amendment rights. I have no idea about the legals ins and outs of this. Does a parodist owe dues to the author of the work being parodied? I would have guessed not, or parody wouldn't exist as a form. The Williams lawyers are arguing that Mark Sam's parody is pointed the wrong way: “It seems at best to be a comedic political commentary directed at the events surrounding the Katrina catastrophe in New Orleans,” said one of the lawyers representing the university. “As you may know, in order for a parodist to take advantage of a fair-use defense, a parodist’s criticism must target the copyrighted work at least in part.” A serious error in judgment, as anyone who has seen Mark Sam's line in platinum blonde wigs can attest.