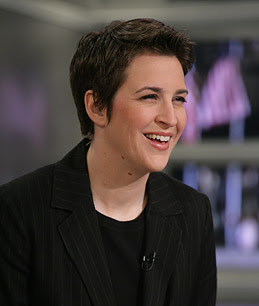 One of the unintended consequences of Jon Stewart's success is the amount of fake laughter one hears on the news these days. It was the Stewart's Daily Show, I'm assuming, that prompted cable news producers to rush around looking for freelance comedians to liven up their shows. They're everywhere now, from CNN to MSNBC, from the Rachel Maddow Show to Keith Olbermann's Countdown — a little comedy 'bit' at the end where some putz you've never heard of provides his irreverent take on the day's news events. Far worse than the comic routines themselves, however, are the fake laughs that the anchor has to provide, to reassure us that what we are hearing is, indeed, comedy. It's worse than canned laughter: at least that was once fresh into the can. Someone had to find a show funny, once upon a time, even if it is not the show you happen to be watching. This something else again — lonely, pre-rehearsed cackles from a single human being at jokes they've already heard five times that day. No technician or camerman ever joins in. The laugh dies in the muffled cocoon of the studio. Even someone as naturally spontaneous and high-spirited as Rachel Maddow sounds like she's humoring her most boring uncle. Please, guys, leave that sort of thing to Larry King.