Confessions of a Streep Agnostic 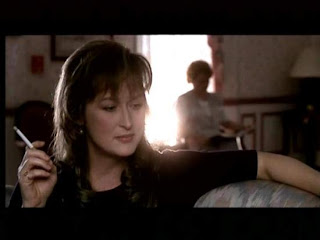 Those vaunted gaurdians of the aesthetic high ground, The Onion, have an interesting piece maintaining that Meryl Streep has never starred in any truly great movies. A long-term Streep agnostic, I was all ears.

Kramer Versus Kramer? "It's more Dustin Hoffman's movie than Meryl Streep's movie." Sophie's Choice? "A fairly routine melodrama, with a Holocaust backstory thrown in to make the love triangle seem less banal." The Deer Hunter? She was only in it for "three. maybe four minutes." Out Of Africa? "Come on." They're a little unfair to The Bridges of Madison County and The Devil Wears Prada but then they also forget to mention The French Lieutenant's Woman, which proves their point exactly. There's a lot of high-toned crap in there.

I wonder, though, if what this actually illuminates is a difference between actors' and actresses' careers. Look at their examples they give by way of comparison: Al Pacino in The Godfather and Dog Day Afternoon, Robert De Niro in Raging Bull and Taxi Driver, Dustin Hoffman in The Graduate and Midnight Cowboy. That's one big helping of dirty realist machismo. You can practically smell the hangover. The only woman who gets her own "classic" is Diane Keaton in Annie Hall. There's a big boy;s club in effect. Actor's careers are more auteur-driven. They make hard, gritty movies of the kind that get called "classics" by critics who like hard, gritty movies. De Niro hooks up with Scorsese and the result is a small library of classic movies. Same with Hanks and Spielberg. Where, in short, is Meryl Streep's Tarantino?