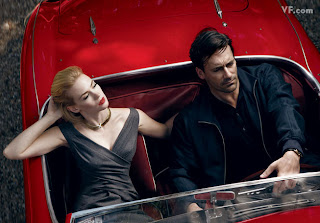 So I'm watching Mad Men for the first time this evening. I've held out for as long as I can. At first you resist simply because it's new and you don't want to take a risk. Then everyone says it's good but you still don't watch it. This time your resistance is sulky. 'I refuse to accept than can be good,' you go to yourself. 'I must have refused to start watching it for some reason.' And then it starts winning awards. You're still not watching it but now you feel a little excluded, resentful of those cool, risk-taking trend-setters who watched it from the beginning, because how on earth are you going to catch up even if you wanted to? You double down in your misery. And then the third seasons comes along. You've got a gap for a new program in your life. Like someone who sees a bus pulling out from the stop and decides to jump onboard — hell, why not — you start watching. Just like that.

Nobody say anything, okay?