The great and the good 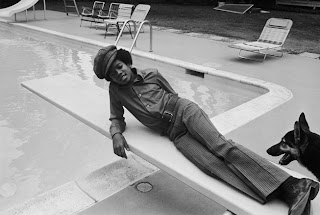 One of the nice things about walking around New York at the moment is how much Michael Jackson music you hear playing out of passing cars. I'm not overly fond of hip-hop blasting out of rocking pimp mobiles; I don't like the queasy feeling you get in your chest from drum 'n' bass being played at top volume. But to hear Don't Stop Til You Get Enough — the closest the 20th century ever came to producing a Bach fugue* — drifting out of an open-top convertible, as I did the other night on the corner of Bleecker and 10th, is something else. Life does not get much better that hearing music you love played from someone else's car. It even beats hearing that same music in your own car, because of the bonus feeling of connectedness and community you get — the treasurable confirmation that the good and the popular can be one and the same thing.

*Actually I'm not really up on my Bach. And I wouldn't know a fugue from a cantata. But Bach is the guy everyone always invokes when they want to mark the absolute peak of musical complexity, with all sorts of competing contrapuntal stuff going on that somehow combines into a whole of almost mathematical beauty. That's how I think of Don't Stop Til You Get Enough. Plus you can dance to it.