A font of irrepressible self-delight 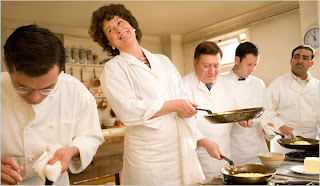 "By now this actress has exhausted every superlative that exists and to suggest that she has outdone herself is only to say that she’s done it again. Her performance goes beyond physical imitation, though she has the rounded shoulders and the fluting voice down perfectly." — A O Scott reviewing Meryl Streep's performance in Julie & Julia

Really? I found her close to unwatchable. The self-delight coming off the performance is so overpowering that it was all I could do to resist a movie-long sulk. It's this close to being the worst bit of over-acting you've seen in years (which means she's virtually a shoo-in for yet another Oscar). She sounds like one of the Pythons doing a woman, and acts like a tipsy eleven- year old, stealing scenes that are already hers, rolling her head around her shoulders, chortling constantly, as if thinking of some secret joke, which only she has got to hear in its entirety but which we in the audience are sure to get if we are smart enough. The joke, of course, is that Meryl Streep — Meryl Streep — is playing Julie Child. Julia Child! Imagine that! Isn't that something? Isn't that a blast? A hoot? Isn't that just divine? Isn't that the most hysterical thing you ever did hear?

Or not. I'm not sure when all this started. I think it was around Death Becomes Her. That was the first performance where Streep decided she was going to kick off her heels, relax and have her some fun. I'm all for fun, of course, and but Streep's impersonation of the stuff has everything going for it except the quality of relaxation. To me she the person she most resembles in these roles — Death Becomes Her, Adaptation, Mamma Mia, Julie and Julia — is the high school Latin teacher who has had enough of being demonised by her children and decides to join in the end-of-term panto, on order to show her 'lighter side'. The children, meanwhile, smile grimly way through the whole ordeal, not wishing to offend her, knowing how quickly the jolly chortling matriarch in front of them can snap back into being a fire-breathing dragon who has held them captive all term.