A brief history of crazy in the U.S.A. 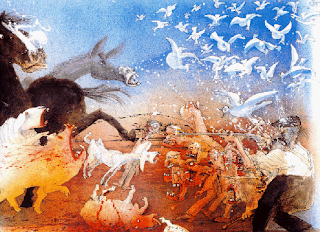 In light of the recent "death camps" imbroglio, Rick Perlstein, author of the superb Nixonland, has written an excellent history of crazy in American politics. Which helps. A lot. It leans left but the view is still pretty good, taking in Vice President Richard Nixon's claim that the new Republicans arriving in the White House "found in the files a blueprint for socializing America; the attempt to take John F. Kennedy's enthusiasm intercontinental ballistic missiles as evidence that the young president was secretly disarming the United States; claims that the entire concept of a "civil rights movement" had been hatched in the Soviet Union; a right-wing radio host assertion that the expanded mental health services introduced by the Kennedy administration were designed to intern political dissidents, Soviet-style.

The instigation is always the familiar litany: expansion of the commonweal to empower new communities, accommodation to internationalism, the heightened influence of cosmopolitans and the persecution complex of conservatives who can't stand losing an argument. The various elements -- the liberal earnestly confused when rational dialogue won't hold sway; the anti-liberal rage at a world self-evidently out of joint; and, most of all, their mutual incomprehension -- sound as fresh as yesterday's news.

There is one difference, says Perlstein.

You never heard the late Walter Cronkite taking time on the evening news to "debunk" claims that a proposed mental health clinic in Alaska is actually a dumping ground for right-wing critics of the president's program, or giving the people who made those claims time to explain themselves on the air. The media didn't adjudicate the ever-present underbrush of American paranoia as a set of "conservative claims" to weigh, horse-race-style, against liberal claims. Back then, a more confident media unequivocally labeled the civic outrage represented by such discourse as "extremist" -- out of bounds. The tree of crazy is an ever-present aspect of America's flora. Only now, it's being watered by misguided he-said-she-said reporting and taking over the forest.