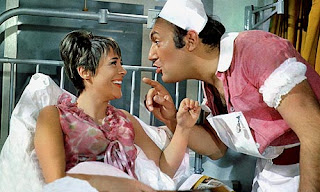 At welovethenhs. Hawking, Cameron and Brown join the fray here. Drudge is indignant ("Brits mock American healthcare?!") over this report. As the dust clears on the whole fracas it is becoming increasingly clear that we have something quite rare on our hands: a situation where both sides look down their noses at the other. Both sides are getting patronised by someone they have long pitied.

The Americans look down on the Brits for their healthcare, having no idea that the British have long looked down on the Americans for the same. Both, unbeknownst to the other, have regarded the other's system as the acme of dysfunction. And — here is where it gets blissful — both are having the other's attitude revealed to them at the exact same time. How often does that happen?