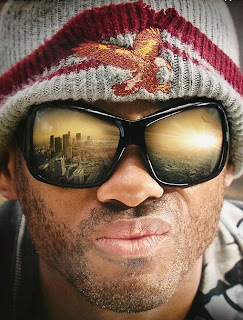 Last night I saw the new trailer for Hancock, the new movie in which Will Smith plays a Bourbon- swilling superhero who sleeps on park benches, flies drunk, crashes into buildings and generally makes a public nuisance of himself. Imprisoned for reckless endangerment, Hancock is put through rehabilitation and finally let out to see if he can exercise his powers with more discretion. 'Can I touch you?' he asks a woman in distress. 'Do you mind if I touch you?' The script, which was about 'why superman can't get a date' according to writer director Akiva Goldsman, has been around for over a decade and was originally turned down for being too risque ('no, no, no, no, no' said Warners, simply). Presumably, ten years ago the idea of a dishonoured, shunned superhero who is attempting to win back his good name with judicious shows of force wouldn't have caught on with the American public. Now, it's a different story, although Ain't It Cool reported tonal problems and they're premiering in Paris. We'll see.