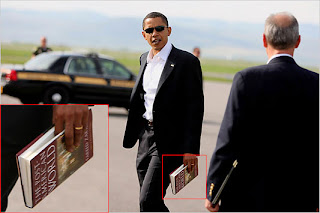 Doris Kearns Goodwin's biography of Abraham Lincoln, Team of Rivals, (also the source for the forthcoming Spielberg biopic). "He is particularly intrigued by the notion that Lincoln assembled all the Republicans who had run against him for President in his war Cabinet, some of whom disagreed with him vehemently and persistently," an aide tells Time. "He talks about it all the time."

Also, Fareed Zakaria's The Post-American World ("How can this giant follow Rome and Britain onto the dust heap of empire if it can prosecute two wars at once without much notice at home? The granddaughters of those millions of Rosie the Riveters who kept the World War II economy going are off to the mall today; if they don’t shop till they drop, it’s because of recession, not rationing" — NYT)

It beats The Hungry Caterpillar.