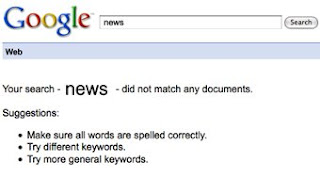 Gawker starts to panic: "It's one big void out there, the canvas is blank, there is no news.... Nicholson Baker's Human Smoke was the most noteworthy book to be published so far this year..... As for the election, we're in a massive lull until at least Labor Day..... The worst film of the year, M. Night Shyamalan's The Happening, is (tellingly) about about an epidemic that causes inanition followed by suicide..... the red siren that blares in Matt Drudge's head has been as silent as the one in James Wolcott's.... The Web is dead.... The television season is over.... The economy is in limbo.... There are no new magazines.... There are no parties.... Politics has sucked the oxygen out of media...."

I wonder if they said the same thing during the Blitz. All those tedious bombs. That frightful bore Hitler. A war that was just another sequel.... Actually, they did: "The British governement's morale sampling service concluded that people in England found the war too dull. 'A new restlessness is setting in, a desire for something to happen, however unpleasant.' It was February 1940." (Human Smoke)