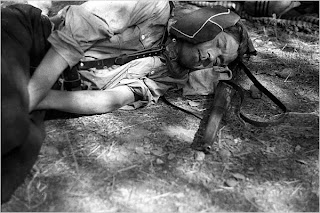 According to data compiled by Andrew Tyndall, a television consultant who monitors the three network evening newscasts, coverage of Iraq has been “massively scaled back this year.” Almost halfway into 2008, the three newscasts have shown 181 weekday minutes of Iraq coverage, compared with 1,157 minutes for all of 2007. The “CBS Evening News” has devoted the fewest minutes to Iraq, 51, versus 55 minutes on ABC’s “World News” and 74 minutes on “NBC Nightly News.” (The average evening newscast is 22 minutes long.)

CBS News no longer stations a single full-time correspondent in Iraq, where some 150,000 United States troops are deployed. Paul Friedman, a senior vice president at CBS News, said the news division does not get reports from Iraq on television “with enough frequency to justify keeping a very, very large bureau in Baghdad.” He said CBS correspondents can “get in there very quickly when a story merits it.”

Don't worry, says Andrew Sullivan. We may be in for an October Surprise.