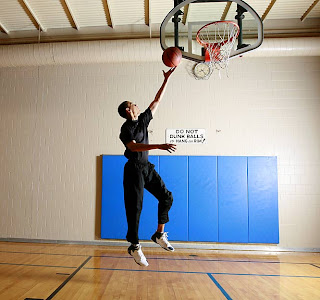 "A team player, preferring mostly to help teammates score rather than to shoot himself. Obama did show some defensive softness but a surprising toughness any time his basket was threatened, and while he at times fell prey to his ambition, when it was game point, he showed a degree of leadership, taking charge with the ball in his hands... driving hard to his left for the game-winning lay-off." — Bryant Gumbel on Obama's basketball game, Real Sports, HBO.

"In November 1992, Bush and Roland Betts were in Santa Fe to host a dinner party, but they had just enough time for one set of doubles. The former Yale classmates were on opposite sides of the net. 'There was only one problem—my side won the first set,' recalls Betts. 'O.K., then we're going two out of three,' Bush decreed. Bush's side takes the next set. But Betts's side is winning the third set when it starts to snow. Hard, fat flakes. The catering truck pulls up. But Bush won't let anybody quit. 'He's pissed. George runs his mouth constantly,' says Betts indulgently. 'He's making fun of your last shot, mocking you, needling you, goading you—he never shuts up!' They continued to play tennis through a driving snowstorm." — Gail Sheehy, The Accidental Candidate.