Bush Says Iraq was 'the Fun Thing To Do' 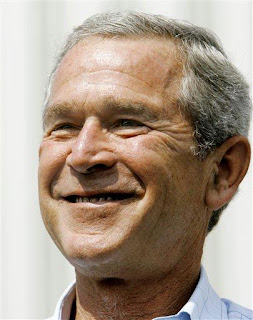 WASHINGTON—Despite harsh criticism from both sides of the political aisle, the U.S. populace, and former members of his own administration, President Bush once again defended his 2003 decision to invade Iraq, saying that, in the end, it was the fun thing to do.

"On Sept. 11, 2001, we as a nation faced a difficult decision, an important decision, a decision between what was fun and what was wrong," Bush said during a speech before Pentagon officials Wednesday. "We could have backed down and allowed the terrorists to win. But instead, we stood up to the challenge before us, and we said, 'Bring it on—bring the good times on!'" "Mark my words," Bush continued. "When the dust settles and the smoke clears, history will look back on the Iraq War as a total blast." — The Onion

Bush is very keen to let history be the judge of his actions, as we all know, which begs the question of how many wars get better — upon reflection, with the passage of time. The second world war: most thought that was a Good Idea at the time and it remains so. Vietnam: people thought it a Bad Idea at the time and still think so. The cold war: one of the participants had a heart attack, so we'll never know. I'm no historian but I can't think of a single example of war that improved with age. Who knows — maybe everyone thought the 100-years war was rubbish at the time but when it got to a hundred they thought: wow. A hundred. Or maybe The Trojan war seemed like a total waste of time until Homer came along to write about it. If anything history is a harsher judge. Someone needs to tell the president that today represents the high water mark of approval for his war. It's downhill from here.

If you can think of any counter examples, let me know.