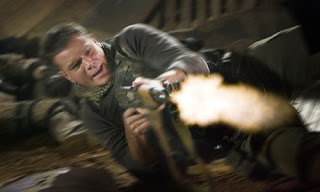 Can you make a thriller out of a wild goose chase? Paul Greengrass certainly gives is a good go in Green Zone, which stars Matt Damon as an American field marshall on the hunt for WMDs in Iraq just after the invasion. The camera shakes, whips and pans, the explosions boom, gun shots split your eardums, people shout and scream in Iraqi, and Damon runs around poking his nose into streets so dark the film camera barely picks out the bald shining heads (the bad guys) in the murk. The whole experience is rather like having your head bagged and being spun around five times before being driven to an undisclosed location where you are lectured, hard, on the weakness of the U.S.'s rationale for war. Incredibly, that really is the movie's MacGuffin — something the audience already knows. Call me old fashioned but any film in which the audience, at any given moment, know more than all the characters combined is going to be a little lacking in the suspense department. It's like making a whodunnit about the Manson murders. Would Damon really get it into his head, having found out that the WMD intel was manufactured, to go on a self-appointed fact-finding mission which costs the lives of dozens of Iraqi and American soldiers? "Why did you come here?" asks an Iraqi general. I was looking forward to the answer myself, having spent much of the previous two hours trying to figure it out, but none was forthcoming. The profligacy of the Iraq war proves wholly contagious. At least only $100 million got wasted, this time — the cost of half a day's fighting in Iraq.