LISTOMANIA: Best Drunks at the Movies 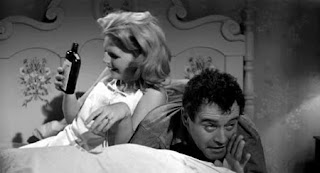 Most modern portrayals of drunks after The Lost Weekend have been grave, public information affairs designed, rather boringly, to raise public awareness of alcoholism; most portrayals before it now play like naive daydreams. Dudley Moore, drawing on the drawl and body language of his old partner Peter Cook, bucked the trend and played Arthur for pure contagious fizz (although he got sober in the sequel: what's with that?). Nic Cage got the death rattle and unearthly pallor, James Mason the pure wheedling egotism, Matt Dillon the somnolence: he moves at half the speed of everyone else in the movie. Sam Rockwell gets the pummelling self-punishment. I'm not sure Ingrid Bergman got much of anything right but she looked gorgeous doing it: she's how you'd want to picture yourself, getting messy-drunk. Liz Taylor was all but unwatchable, setting the tone for so many Oscar bids and showcase performances to come. Remick gets it for me precisely because hers is not a showcase performance. It's supposed to be Jack Lemmon's picture. For most of its running time you think it is Lemmon's picture. Remick's alcoholism sneaks up on you, and when she goes down it's so purely gratuitous as to be heartbreaking. She's the one who stays drinking at the end, remember, peeling off from her newly-sober husband in order to stay drunk, snarling as she goes, one of American cinema's truly lost souls.