Dude deserves a Liam Neeson biopic not a $50 bill 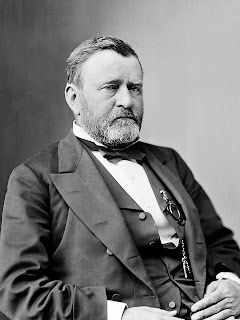 "Grant's list of presidential achievements is rather meager for being depicted on such a notable piece of currency. His greatest claim to fame was being President Lincoln's selection to lead the Union army in the Civil War. But even in that instance, he wasn't Lincoln's first choice. Lincoln first requested Robert E. Lee's services, before Lee committed his loyalty to the Confederacy. In his two terms, Grant oversaw the end of the South's Reconstruction, and the Transcontinental Railroad was completed on his watch. However, Grant's presidency was also riddled with scandal.... Grant was notorious for his lifelong battle with alcoholism and his presidency has been consistently ranked in the bottom third of all U.S. presidents by bipartisan coalitions of scholars"— The Journal

The writer is, of course, scoring political points. I couldn't care less who goes on the $50 bill but Grant won the civil war. He saved the Union. And he did so while consuming enough bourbon to fell a small herd of buffalo. He was the civil war's answer to Robert Shaw's shark hunter in Jaws, Burton to Lincoln's Taylor. The fact that the beetle-browed hero of the civil rights movement turned out to be a boozy rogue is one of those ironies surely too good for Hollywood to pass up. He is the one American president most sorely in need of Liam Neeson Biopic, complete with the most famous I'll-have-what-he's-having exchange of dialogue in the history of the republic:

"Grant is a drunkard," a senior politician told Lincoln. " He is not himself half the time. He cannot be relied upon. It is a shame to have such a man in charge of the army"
"So Grant gets drunk does he?" asked Lincoln.
"Yes he does and I can prove it."
"Just find out what brand of whiskey he drinks because I want to send a barrel of it to each one of my generals."