The best of Sandra Bullock: Speed 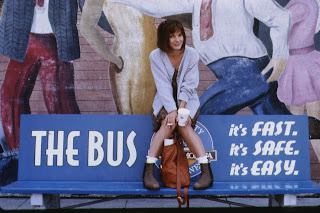 1. Speed
2. While You Were Sleeping
3. Infamous
4. Demolition Man
5. Miss Congeniality

It's not like she was that overdue. I love Sandra Bullock, and hold her spritzing in Speed and While You Were Sleeping in the kind of esteem Meryl Streep fans reserve for Sophie's Choice and Kramer Vs Kramer. (Here's a prediction: in fifty years time, the vast majority of Streep's films will go unwatched, except for films like Julie and Julia, Its Complicated and Mamma Mia — the stuff she's done in the last few years). Everyone thinks Streep was being self-deprecating when she said Bullock's naturalness was a rarer thing than Streep's mastery of technique. She wasn't. It is. Bullock has the most infectious high spirits of any actress working today. But there is no denying the crappiness of that back-catalogue. Speed 2. Hope Floats. The Net — these are less movies and more low self-esteem made manifest. Bullock seemed to tire of being America's Sweetheart even faster than Julia Roberts did (what is it with that job?) and when she came back in her serious incarnations those roles, for the most part, felt like Roberts hand-me-downs. The Blind Side is a babyfood Erin Brockovich — bland, pureed, tasteless. The best acting job she has done in the last few years is mask her embarrassment over that film's success — her distaste for the woman she played is palpable. I wish there were one more movie, or part, as good as Speed in there. Michelle Pfeiffer has good cause to be steamed.