It's no longer just 'hope'. Something got changed 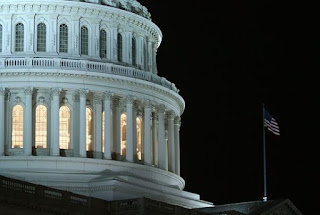 "There are at least two glaring anachronisms in American society today, through which it is possible to discern how much one’s children, when they reach power in adulthood, will regard their parents as Neanderthals. One is the country’s retrograde treatment of gays and lesbians under the law. The second is that we succored for so long a political economy with a social-insurance hole so large that forty million people managed to drop through it before we got around to fixing it" — Steve Coll, The New Yorker

"Barack Obama has sealed his reputation as a president of great historical import. We don't know what will follow in his presidency, and it's quite possible that some future event--a war, a scandal--will define his presidency. But we do know that he has put his imprint on the structure of American government in a way that no Democratic president since Lyndon Johnson has." — Jonathan Chait

"After leaving the Democratic caucus in agony for a week in the wake of Massachusetts, Obama set a course that was a combination of conceptual clarity and inspired improvisation... The flip side of Obama's perhaps naive belief that he can win Republicans over is his ability to show them up. Americans are confused about the plan, but they are not confused about the man. By large margins they trust Obama more than they do the Republicans to produce rational solutions to the country's problems. In the past month, he exploited his mastery of policy detail, his pragmatism, his focus on effectively alleviating the suffering he spotlighted, and his willingness to stake his political future on getting this bill passed to the utmost. The full eloquence and passion of the campaign came back to his lips in forum after forum and speech after speech... He moved the needle of public opinion enough to move enough House Democrats to "yes." The process may have been frustrating, and long, and ugly, as Obama told the crowd at George Mason on Friday. But it was also glorious. " — Andrew Sprung

"Obama's great strength is patience. He has, as no one I can think of has had in recent times, an ability to just completely ignore the 24 hour news cycle.... it's an enormous strength. Partially because winning each and every news cycle is almost certainly a waste of time. Partially because everyone else is putting so much effort into it, so the player who doesn't is freeing up an enormous amount of time and energy. Partially, I suppose, for the same reason that (warning: actually horse racing analogy coming) I'll always bet the only closer against a field of speed horses." — Jonathan Bernstein

The Republicans.... weren't so happy.