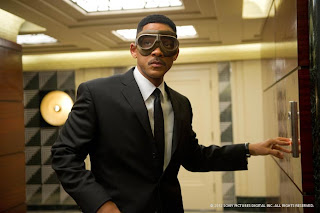 I liked Men in Black 3 much more than I thought I was going to, but then I did read one too many reviews, starting with Richard Brody's in The New Yorker:—


It’s surprising to see an action film that plays so jitteringly like the stretched-thin, papered-over adornment of an elaborately contrived script that it leaves its framework sticking uneasily out between the edges.


Can you think of a new movie with less reason for existing than “Men in Black 3”?

then regained his good humor in time to conclude


You don’t need to study up on the previous installments or master a body of bogus fanboy lore to enjoy this movie for the breezy pop throwaway it is. Your expectations may be pleasantly low, and you may therefore be pleasantly surprised when they are exceeded.

Ah the cruelty of that kicker. Why has everyone been so begrudging? Are they trying to out-sourpuss Tommy Lee Jones? Play the grumpy cuss to the movie's Will-Smith-like indefatigability?  David Edelstein, in New York, was the best at combining both smile and frown:—

As the younger K, Josh Brolin wears a semi-squashed nose (it is age-appropriately less spread), slits his eyes, and replicates the music in Jones’s voice — that weary, quarter-tone-up-the-scale Southern sigh that makes good comebacks bluesy. They’ve cast a still-untapped major talent — Jemaine Clement, of Flight of the Conchords — as the snarling extraterrestrial villain Boris “the Animal” and concocted a fascinating character in Griffin (Michael Stuhlbarg), a disheveled entity hidden under multiple layers of clothes and driven mad by his ability (more curse than gift) to see multiple futures at once. Such agreeable personalities as Emma Thompson (as the new boss), the dishy Brit Alice Eve (as the younger Thompson), and Bill Hader (as Andy Warhol!) flit in and out. The finished product is in a different league than the whompingly terrible Men in Black II — it hits its marks. But it’s not inventive enough to overcome the overarching inertia, the palpable absence of passion.

This is why Edelstein is the best film critic we have right now: he will always let a performance steal from him the severity of his own conclusions (that description of Brolin doing Jones is marvellous). He's a floozy for fleshtones. Because put like that the movie sounds pretty good. And it is. I don't know why everyone has their legs crossed so tight. In many ways it is the fullest expression of Barry Sonnenfeld's anarcho-absurdist view of history as cosmic-pinball-machine: the MIB series has always been the best adaptation of The Hitchhiker's Guide to the Galaxy never made. I loved all the jokes to do with scale in the first film — tiny guns that blasted you off your feet, rubber balls that wrecked buildings, whole galaxies in tiny amulets and so on. It was the world's first schlemiel blockbuster, with a cosmic-neurotic's view of the universe that turned the machismo of action moviemaking on its head. (Imagine Sleeper, if Woody Allen had been press-ganged into active duty on a summer blockbuster and somehow survived). I can't remember anything that happened in II — Will Smith must have hit me with that neuraliser of his — but the third is roughly the equal of the first, thanks to a deep bench of gags, Michael Stulberg's neurotic omniscient (the closest Sonnenfeld has come to a self-portrait), and an expectedly sweet ending that hit me right between the eyes (Brody thought it "gloopy", but then that's critics for you: the one thing they consistently undervalue is emotion — even the good ones like Anthony Lane, who thought Finding Nemo a mis-step for Pixar because it was too 'sentimental'). I would take Edelstein's point further and suggest letting the performances carry you away and forget about plot completely, rather in the manner of the old Bob Hope and Bing Crosby 'Road' pictures. The only thing I really didn't like was Will Smith's paranoia about people invading his space; it didn't seem a joke to me any more, after that footage of him slapping that Russian. It could be his Oprah's-sofa moment. B