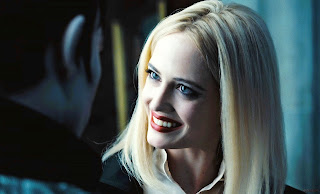 As the witch Angelique Bouchard  in Dark Shadows Eva Green has big, crazy-beautiful eyes, a grin like the Joker's, and long rangy limbs that do seem to flop into place, even when standing upright. When she points your way, lowers her head and stares through her eyelashes at the camera, she looks like a demonic mirror-image of a movie director: a marionette, pulling her own strings. Her director here is, in fact, Tim Burton, who is clearly in love with the alabaster-skinned vixen they've brewed up between them to bewitch pale, vampiric Johnny Depp, and rightly so. The movie itself is pretty thin stuff: a beautifully-photographed pastiche of the old Hammer horror films, complete with magenta-and-grey color scheme and looming score, that labors to stretch its single joke — vampires are spooked by lava lamps! — into a 90-minute feature. It's Depp and Burton's 8th film together and their famous mind-meld, which bypasses mere words, or human understanding, has bypassed the need to come up with a fresh script: it's nothing you haven't seen in The Addams Family, with Depp repeating his English Stiff Act from Sleepy Hollow, or any other of the films he's made with Burton in which he stares out at the audience through a pancaked rictus like a terrified marmoset. But Green is a knockout in every scene she's in, her head lolling as if might at any moment detach itself from her neck, roll down her outstretched arm and drop into your lap. Lucky you. This is acting as out-of-body experience, fleshy and delirious: nobody seems in possession of her body, least of all her. B-/C+