Bearing the moral weight of a nation 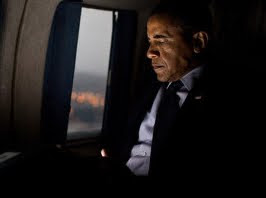 "Justly or not, drones have become a provocative symbol of American power, running roughshod over national sovereignty and killing innocents. With China and Russia watching, the United States has set an international precedent for sending drones over borders to kill enemies. Mr. Blair, the former director of national intelligence, said the strike campaign was dangerously seductive. “It is the politically advantageous thing to do — low cost, no U.S. casualties, gives the appearance of toughness,” he said. “It plays well domestically, and it is unpopular only in other countries. Any damage it does to the national interest only shows up over the long term.”— NYT

I would be equally worried by the damage done to Americans.  Waging war has never felt as painless as it does to 21st century America. We are heavily insulated from the cost of war by media squeamishness, an all-volunteer force, heavy debt, and now drones. They offer a Lethean draught of moral absenteeism, removing us from all sense of agency with regard to actions carried out in our name. Killing a man ought to carry more weight.

Aides say Mr. Obama has several reasons for becoming so immersed in lethal counterterrorism operations. A student of writings on war by Augustine and Thomas Aquinas, he believes that he should take moral responsibility for such actions. And he knows that bad strikes can tarnish America’s image and derail diplomacy.

One gets the sense from the Times report not just of the burdens of office, but something altogether unhealthier: the moral responsibility of a nation being borne by one man, rather like those Tokyo nuclear plant workers who absorbed all that toxicity to prevent meltdown. It's got to be cooking his insides.