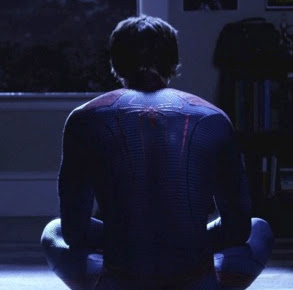 Things we liked about The Amazing Spider-man:—

1. Andrew Garfield. This Spiderman is, above all, smart, with something of Robert Downey's jr's ability to talk rings around his own emotions. He's mile-a-minute anticipator/empath, everything tumbling out of his mouth as if he's already run the conversation through to the end, several times, and still hasn't found an ending he's quite comfortable with.

2. The biting. During what looks like a Sting video.

3. The swinging. In the Sam Raimi version it was bendy, bone-breaking, in defiance of most known physical laws; here it actually resembles the trajectory of a real body in motion, with particular attention paid to the brief moment of weightlessness at the apex of each swing, Spidey's web-line slackening like a sail. Beautiful.

4. Emma Stone. Not as much of her as I would have liked, but still. The look of astonished arousal on her face after being lassoed was worth the price of admission.

7. Again, Garfield: his beanpole physique, height, physicality. The rhyme with the buildings. The way it was always clearly him inside the costume. Unlike trhe Maguire versions: it could have been anyone up there.

8. The new web-shooters. Also the underground web and its use as an early-detection system.


1. The score. One of the worst I have heard in years. Give me three minutes and a Speak-and-Spell and I could compose something better.

2. The Lizard. The snout of the lizard. The green gas cannisters of the lizard (because that's what color a Lizard's cannisters are, naturally). They way everyone kept calling him "the lizard." Doesn't he have a name? Lizardo? Dr Gekko? Very disappointing. An unusual flaw: the hero is more interesting than the villain.

3. Webb cannot introduce characters for toffee. Our first shot of Spidey in costume? What should have been the punctuation to a sequence of action (gun whipped from hand, owner slung around, who's doing this? cut to: Spiderman in full regalia) is instead thrown away: a dramatically contextless shot atop a building. Same with the Lizard: first scene in aerial long-shot, when what you wanted was through a car window or in a rear-view mirror.

4. Sally Field. Her apparent conviction that Aunt Mae's emotions are the true focus of the piece.

5. The two-and-a-half hour running time. Many candidates for scenes that could go, but the fight-less dialogue sequence between Pete Parker and Rhys Ifans (prior to the mouse-for-breakfast discovery) a strong contender.