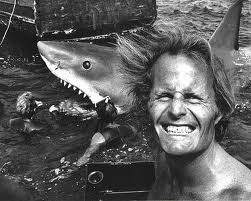 In 2001, I interviewed Richard Zanuck, who passed away this morning, for my book Blockbuster: How Hollywood Learned to Stop Worrying and Love the Summer. Below are excerpts from our interview*.

On the first test screening of Jaws, in Dallas:—

“There was a driving rain and we were concerned that nobody would show up. In those days we didn't use recruited audiences. We used regular audiences. Somebody from publicity would tell a local disc jockey to drop a rumour once or twice during the day. When we drove up there that evening about half-an-hour before, we saw this enormous gathering of people with their umbrellas — just huge, massive.  We thought it was for some other event in this great shopping centre. As we got a little close, we realised it was for us. It was very exciting."

“The audience was very excited. You could feel the buzz and excitement in the air even before the lights went down. Once it started we had them in the palm of our hands. They were getting all the thrills, all of the humour.  When the shark first jumped out of the water, when Roy Scheider is chumming at the back of the boat there was a huge scream. I thought the whole place would explode and David [Brown] and I grabbed each other's arms and just clutched each other. It was at that moment that we knew we had a giant hit. They bought it. They bought that dummy shark.”

On the second screening, in Long Beach (and the myth of Jaws' 'wide' release):—


“Everything played even bigger than it had in Dallas. People were ripping out the seats. [Lew] Wasserman says 'Everyone come back to the men's room.' He said 'How many theatres do we have?' I said, 'I'm very proud, Lew, I've got 900 on July 20th.' He goes, 'I want you to drop 300 of them. I want this picture to play all summer long. I don't want people in Palm Springs to see the picture in palm springs. I want them to have to get in their cars and drive to see it in Hollywood.' People were flying from New York, from Europe, to see it, because it was the thing to see."

“Steven and I have talked a couple of times recently about had we had the ability to do CGI  we probably wouldn't have made as good a picture. It would have been too perfect and we would have used it too much. The fact is we intended to show the shark in the first scene with the girl. We didn't have it, so in a weird way because we didn't have the tools we had a better picture. We had to invent things to keep the shark alive."

* with thanks to Laura de Lisle, for her keen-eyed copy-editing