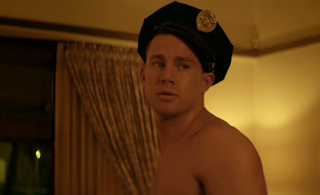 If Channing Tatum were any better — if he had the propulsive magnetism of a young Travolta or the transfixing beauty of a young Richard Gere — Magic Mike would be a straight-A instant classic. He's certainly better than you've ever seen him, scuffing up his delivery to fit into the loose naturalistic texture favored by Soderbergh, who leaves in a lot of his leading man's flubs in, in the interests of 'realism'. Save for one superbly inarticulate  speech at the end, Tatum's mistakes never sound like genuine hiccups: there's a slight puckering of fear around ever one — the giveaway airlessness of split-second panic. Tatum gives the impression of someone who is ever only a beat away from fleeing the set — or self-sabotaging his performance with a giggling fit. He could almost be pranking himself, a la Ashton Kutcher. But you don't really notice or care: most of the time you're too busy laughing with glee at the uproarious dance routines, during which Tatum turns himself into a human moebius strip, or drinking in the charms of Matthew McConaughey, a tan, leathery reptile who inducts newcomers into the "cock-rockin' kings of Tampa" and holds the female audience in shrieking thrall. For it's first 40 minutes, the movie is a filthy delight, reminiscent of both American Gigolo and The Wrestler in it's quasi-Foucaldian take on the trade in human flesh; in a lovely touch, Tatum insists on leaving the plastic wrapping on the interior of his car intact: nothing exists in his world that can't be repawned. The film's view of capitalism's lowest-rung hustlers and hawkers is steely-eyed and a little unremitting: I left the theatre a little more soiled than I expected to be. But McConnaughey has never been better and newcomer Cody Horn radiates a beautifully amused skepticism as the sister of the good-looking 19-year-old recruited by Mike into the strip club; her radar never quite turned off with regard to her brother, she nevertheless allows herself to be charmed by Mike, and a little repulsed: Horn combines all these things effortlessly. As do the audience. I could have done with a little more of her. B+